Neighborhood Forest, a nonprofit organization that gives away seedling trees to children, plans to distribute nearly 1,400 free trees to Fairfield area students to be planted on Earth Day.

According to the organization’s website, the trees are given as part of an initiative to provide children a way to connect with the earth, assist with neighborhood beautification and reduce the amount of carbon dioxide and other carbon compounds in the air.

The organization, which plans to deliver more than 5,000 free trees April 22 in five states, including Ontario, Canada, has its roots in Fairfield.

Vikas Narula (1990 Maharishi School graduate) is Neighborhood Forest’s founder. He was a junior at Maharishi University of Management in 1993 when he initially conceived the idea for the project. 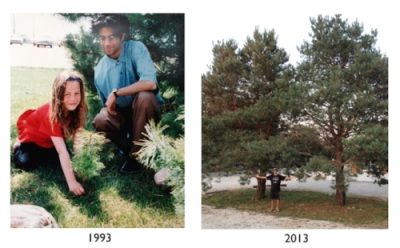 This photo, taken in 1993, shows Vikas Narula helping a Fairfield student plant a seedling tree. Narula, founder of Neighborhood Forest, launched the organization to provide students with trees to plant on Earth Day.

The money raised from the first EcoJam was used to purchase several hundred trees for Fairfield area youth.

“It was a key fundraiser for us,” Narula said. “I can’t believe it’s still going on.”

After graduating from MUM in 1994, Narula moved to Minneapolis, Minnesota, and began working in corporate America.

In the midst of climbing the corporate ladder, Narula found himself bedridden for a month, and he realized he was dissatisfied with the direction in which his life had taken.

Narula said his “deathbed” experience brought the tree project back to the forefront of his mind, and he launched Neighborhood Forest in 2009.

“It’s a fantastic feeling really; it’s a feeling of coming home,” Narula said. “What started as a not so good experience with ill health, made me realize what I really loved and had a passion for. It was something that I had to go away from to realize how much it meant to me.”

Since 2010, Neighborhood Forest has provided trees to more than 10,000 children who have helped plant more than 5,000 trees across the twin cities of Minneapolis and St. Paul, Minnesota.

Sponsoring one child to plant a tree on Earth Day costs $1.99 annually.

“We secured funds from wonderful sponsors, [such as] Hy-Vee, Everybody’s Agri-Industrial Plastics, Cambridge Financial Research and Iowa State Bank,” he said. “About one-third of families in Fairfield signed up.”

Participating students will plant eastern white pine seedlings, and tree shipments will arrive at the schools prior to Earth Day, April 22.

“The beauty of it is that there is so much work that needs to be done,” Narula said. “The sky’s the limit. There’s so much joy to be derived from this.”

Maharishi School graduate Noah Schechtman (1997) and his wife Vidya were recently highlighted in an MUM Achievements article. The article is re-printed below.

According to a recent NBC News report, reduced school violence and suspension, improved academic performance and attendance, reduced anxiety and stress, and increased self-esteem and happiness are just a few of the striking results the Quiet Time program has achieved in some of San Francisco’s most stressful schools since the program’s 2007 launch. 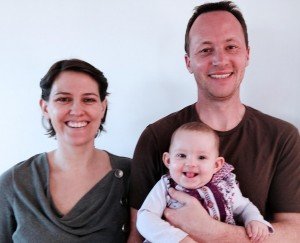 MUM alumni Vidya and Noah Schechtman, with their daughter Ella

MUM alumni Noah and Vidya Schechtman are part of the team that has taught the Transcendental Meditation® program to over 5000 students in a dozen schools in the San Francisco Bay area. Noah is now program director at the Center for Wellness and Achievement in Education (CWAE), responsible for implementing the Quiet Time program in schools, prisons, businesses, and non-profit institutions.

Noah earned a BA in Maharishi Vedic Science in 2002 from MUM, and Vidya graduated with a BA in Business in 2004. “My education at MUM was very well rounded,” said Vidya. “The business program prepared me to become a manager. The emphasis on balance in life, because we work really hard, was very helpful.” 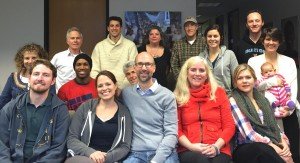 The staff of the Center for Wellness and Achievement in Education

The CWAE currently has a waiting list of 10 schools wanting to implement the Quiet Time program. “When we started doing this nine years ago the schools thought this was out of their paradigm, and we had to convince them to give it a try,” said Noah. “Now when we start the conversation they cut us short and say ‘We have heard the stories, we just want to know how we can have it in our school.’ ”

An increasing body of independent research studies has been documenting the benefits of the Quiet Time program, resulting in its widespread acceptance as well as funding from a variety of sources. In addition, the CWAE received the Public Health Champion Award from The National Community-Based Organization Network (NCBON). What started out as a pilot program turned into a stable and fulfilling career for Noah and Vidya. 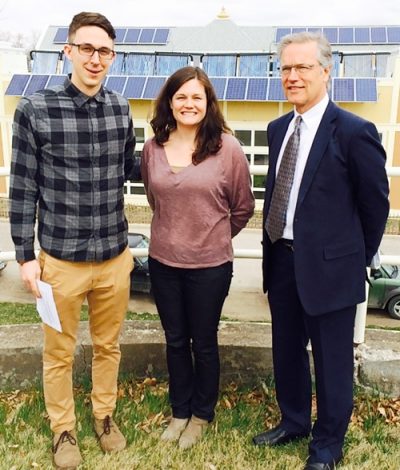 Brooklyn Urban Garden School, which opened in 2013, is a charter middle school that was founded by a group of Brooklyn local parents, educators, and community volunteers. The school’s focus is on sustainability. “We recognize the impact of our actions on the planet, our community and ourselves, and we pursue viable long-term practices and big-picture thinking,” the school states on its website. It’s pursuit of sustainability is embodied in the acronym “CARES”: Community, Awareness, Reach, Exploration, Student Voice.

The Quiet Time program and Transcendental Meditation is an excellent fit for the school. The community is actively seeking to expand the awareness of its students, to have them “stretch” to expand their potential, and to assume responsibility for exploring their potential. Currently, 94% of the student population have learned the TM technique. Principal Rosenbury said that TM was a great aid in helping students create a settled atmosphere conducive to learning at the school.

From its inception, BUGS has been part of the David Lynch Foundation’s Quiet Time program. According to the DLF’s website, “the success of the Quiet Time program has generated a demand that far exceeds our available resources. Right now, there are literally hundreds of schools with tens of thousands of underserved students who are waiting to learn to meditate.”

The Quiet Time program, as described by the DLF, “is a practical, evidence-based approach to reduce stress and dramatically improve academic performance, student wellness and the school environment. Quiet Time provides students with two 15-minute periods of Transcendental Meditation each day to help balance their lives and improve their readiness to learn. This schoolwide program complements existing educational strategies by improving the physiological underpinnings of learning and behavior.”

Brooklyn Urban Garden School services a student body of 200 students at this time. Next year its enrollment will expand to around 300, about a hundred students for each grade, 6-8. About half its students meet the federal definition of living in poverty. Twelve different languages are spoken at home. Maharishi School graduate Owen Blake and the David Lynch Foundation are part of the success of the Brooklyn Urban Garden School in New York.

Heather Hartnett, 1999 graduate of Maharishi School, was recently included in a Wall Street Journal article on a new venture capital start-up company. A shortened version of the article, “Human Ventures Names CEO as Startup Studios Proliferate,” is posted below. Click the linked title to read the article in its entirety.

In a time of experimentation in venture capital, Human Ventures is the latest to move beyond the traditional approach to funding startups.

Human Ventures has brought on Heather Hartnett, formerly with venture firm City Light Capital and before that the David Lynch Foundation, as chief executive. Mr. Marchese, who is now with 21st Century Fox full-time, is executive chairman at Human Ventures. He is also supplying capital to the studio.

Startup studios are one of several new, experimental approaches to venture capital, especially related to early-stage funding. More accelerators, crowdfunding platforms and micro-venture funds are getting into the system.

Ms. Hartnett said she would be assembling a team to help launch startups. Three projects are already under way at Human Ventures, she said. The firm will focus first on mobile, consumer, financial technology, health care and some social impact projects, she said.

She said the studio model has the advantage of generating ideas and then looking for the optimal people to bring them to fruition, while providing all the necessary resources for an idea from the start.

But at the same time, there are downsides, such as uncertainty. Ms. Hartnett said she isn’t sure how many projects will be launched, at what rate, and when they would be spun out. It also is unclear what the financial structure between Human Ventures and the resulting startups would look like.

According to the WSJ article, this new cutting-edge venture capital structure will have its own challenges and rewards, ones that time and experience will reveal.

Rohini Kozimor Grace is a 1995 graduate of Maharishi School. She is also an alumna of MUM, and was recently profiled in MUM’s online publication MUM Achievements. The article is printed below. 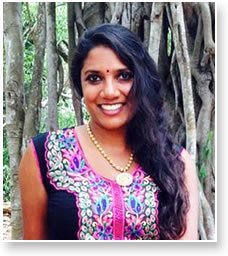 MUM alumna Rohini Grace was born in India and grew up in Australia and Fairfield, Iowa. It wasn’t until she graduated from MUM that she returned to India and became so enchanted with her country of birth that she stayed for the next four years.

Rohini received two degrees from MUM: a BA in Literature in 1999 and an MA in Professional Writing in 2001. After a two-year stint of writing for a natural health publication, she went to India and worked as a fashion scout for an international design company, visiting markets and clothing factories and reporting on the latest trends. She also volunteered at a village school, teaching English and horseback riding and coaching basketball.

When she returned to Boulder, Colorado, Rohini traveled again to India several times a year for work and pleasure. She traveled extensively throughout the country, visiting temples, ancient places, and natural wonders. “I found India such a fascinating country,” she said. “It’s so diverse and unique. So chaotic and colorful and so a thousand percent different from any other place on earth.” 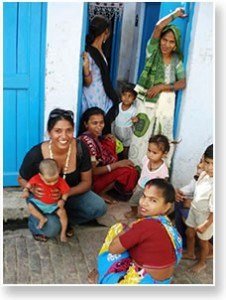 After 10 years of shuttling back and forth between the East and the West, she decided to share the magic she discovered with others. In 2013, she founded Goddess Travels, a boutique luxury tour company offering trips to India that highlight some known wonders and many lesser known treasures off the beaten path.

Her trips to India also inspired Rohini to start writing again. She has been working on a fictionalized memoir based on her experiences in India. “I really enjoyed my writing program at MUM,” said Rohini. “That program coupled with my adventures propelled me into writing my book. India is the type of country that will transform your life and truly speak to your soul.”

During her time at MUM, Rohini also enjoyed the integration of the Transcendental Meditation® program into her daily life. “One of the great things about MUM was the routine and discipline, because that carried over into my life afterward and it’s been really beneficial,” she said.

🌼Click the link in our bio to read the latest b

Amie Saine leading the Lower School PE class in so

"So, in this “unprecedented” time, let’s tur

"More than ever before, we need to learn to be pat

"As we all attempt to pioneer our way through this

👨‍💻👩‍💻Have you seen our latest blo

💻New Blog Alert💻 💻 Whether students are

🚲Our school organized a group bike ride on Labo

Have you heard of Oobleck? Oobleck is a non-Newton