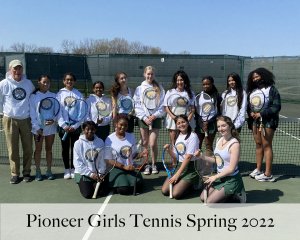 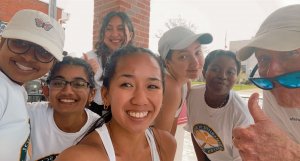 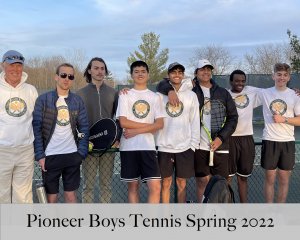 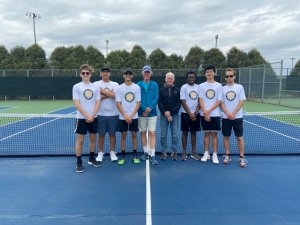 In their final dual meet of the season, the Pioneers raced past undefeated Burlington, leaving the Greyhounds in

the rear view mirror. Burlington had beaten every other area team (including Mt Pleasant twice), making the victory that much sweeter.
The win improved the Pioneers dual meet record to 7-1.
The team had a heart to heart talk yesterday and the boys responded with their best performance of the season.
“We talked about staying locked in and believing that there’s always a path to victory,” said Coach Briggs. “We talked about playing to our potential and dealing with adversity. Pressure is a fact of life in sports and today everyone dealt with it extremely well.”
One match in particular stood out: Pioneer #1, freshman Ruimin Luo overwhelmed Burlington’s undefeated #1, Tryce Barthlshofer, 7=6, 6-0. Tyce is widely regarded as the best player in Southeast Iowa.
“Few people expected Ruimin to win today,” acknowledged Briggs. “ has beaten several guys who beat Ruimin, but our guys know what Ruimin’s capable of. Today we witnessed a special performance. Ruimin was outstanding. He beat a skilled and confident opponent.”
Ruimin has the talent to be a top tier player in Iowa. Considering he’s a freshman who has been playing less than 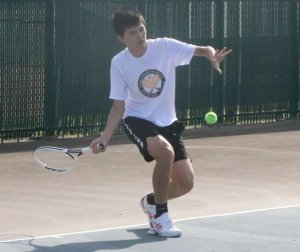 a year, his ceiling is high.”
Ruimin Luo is the Pioneer Player of the Match
Special recognition goes to senior stalwart, Dominic DuPoux, who finished the season with a perfect 16-0 record in dual meets. Congrats to Dominic for his steady play all season long and for his willingness to sacrifice for the team.
Jayanta, Polo, and Chacho also played some of their best tennis today, lifting the Pioneers to a 5-1 lead after singles.
The Pioneers are back in action at FF Middle School on Saturday.

The Maharishi Pioneers boys tennis team won convincingly against Keokuk, extending their record to 6-0 for the season.

The only loss the Pioneers suffered was due to injury. Playing his first match at #1, Zak Askar injured his ankle at the end of the opening set, which he lost 7-5 to Spanish exchange student, Ivan Lopex. The Keokuk #1 is one of the best players in Southeast Iowa. The extent of Zak’s injury isn’t known, but we hope he’s back on court soon.
#1 doubles provided plenty of excitement. With Zak watching from the bleachers, Polo and Jayanta moved into #1 doubles slot where they faced Lopez and Worster. At 7-7, the Pioneer duo lifted their play to seal the win 9-7. Polo served a strong game at 7 all and came up with the shot of the match in the final game to help secure the win.
“As a coach I pay attention to how the boys handle pressure. Pressure is a fact of life in every sport and the boys are getting familiar with the challenging thoughts and emotions that surface in a close match,” explained Coach Briggs. “Conquering the nerves is a major step toward becoming a top level player.”

Congratulations to Polo Altynski-Ross for being selected as Pioneer Player of the Match.

After several weeks of cold, wind, and rain, the Pioneers made the most of favorable weather, scoring a hard fought victory over FHS. 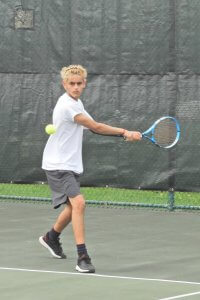 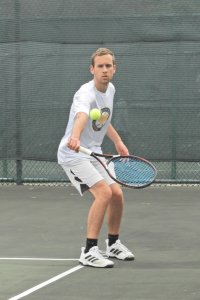 Jayanta Wegman dominated his singles match and played a strong 2nd set in doubles to secure the winning point for the Pioneers. Dominic DuPoux played an equally strong singles match and anchored #3 doubles, repeatedly coming up with clutch volleys when it counted.

Pioneer Players of the Match: Jay and Dominic.
The Pioneers travel to Pella on Saturday.