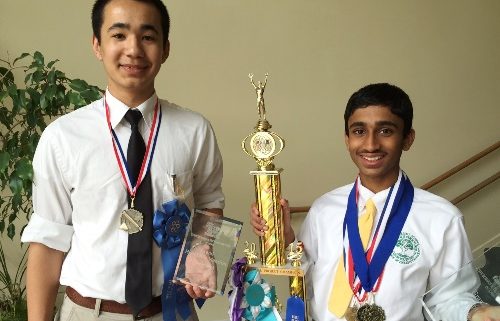 Maharishi School senior Bimba Shrestha with FHS partner Doga Ozesmi were the Grand Honorary Champions of the Iowa State Science Fair in Ames on March 26-27. They also won 1st place in Computer Science, the INTEL Excellence in Computer Science Award, the Mu Alpha Theta Innovation Award, and they qualified for an expense-paid trip to the INTEL International Science and Engineering Fair, held this year in Pittsburgh.

Joining them in Pittsburgh will be 8th grader Pranav Chhalliyil, who also won the 2015 Iowa State Fair Grand Champion award, for the Junior Division. In addition to the Grand Champion award Pranav placed first in the Microbiology division in the 8th grade, overall championship in the Microbiology division, Broadcom championship, and the special Discovery in Science Award.

In May, Bimba, Doga, and Pranav are representing Iowa at the Intel International Science and Engineering Fair (Intel ISEF), Bimba and Pranav for the second consecutive year. Intel ISEF is the world’s largest international pre-college science competition. More than 1,700 high school students from over 70 countries, regions, and territories are awarded the opportunity to showcase their independent research and compete for more than $5 million in prizes. Millions of students worldwide compete each year in local and state science fairs, from which the best win the opportunity to attend Intel ISEF.

Doga Ozesmi participated in the science fair program in the 7th and 9th grades at Maharishi School and decided to participate again as an 11th grader at FHS. “This year,” Doga said, “I wanted to do science fair again and found this cool idea about photonic fences. I thought it would be very difficult to do alone though so I pitched the idea to Bimba who also wanted to do science fair. It turned out he liked it, so we sat down and worked out some ideas and the rest is history, I guess.” That “history,” of course, is he and Bimba winning Grand Honorary Champions of the Iowa State Fair. 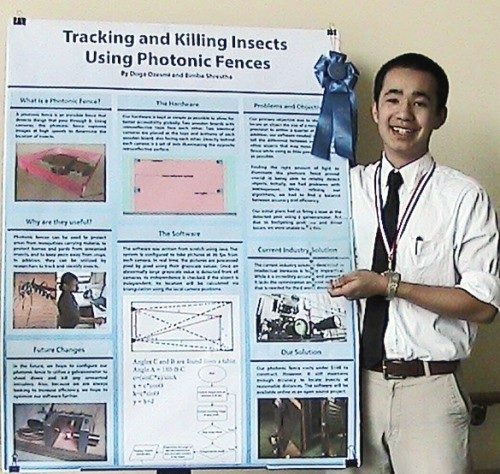 Bimba and Doga’s project this year is titled “Tracking and Killing Insects Using Photonic Fences.” For their project, they designed and developed a photonic fence that locates and tracks insects. Bimba said that photonic fences have a wide array of uses. They can prevent disease-carrying insects from entering a building, they can track and identify insects, and they can help protect crops. “Using cameras,” Bimba stated, “the system locates dark spots against a reflective background. If the spot matches certain criteria, like size, shape, and independence, it is identified as an insect.” Once the insect is identified, a laser could be used to eradicate the pest.

Doga said this year’s project involved “a lot of experimentation and constant testing to get our sensitivity and lighting right. In addition we had to sit down with pencil and paper several times to work out the math behind the location of our mechanism for each setup we tried. Overall, though, it was made a lot easier by working together and we were able to bounce ideas off each other to come up with the best solution.” 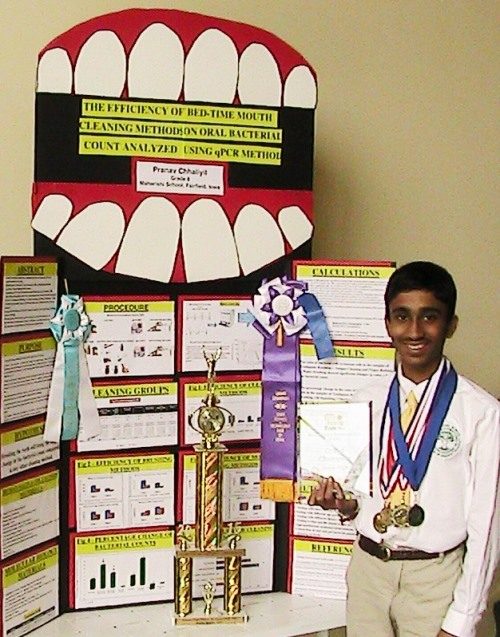 Eighth grader Pranav Chhalliyil’s award winning science project for this year is titled “The Efficiency of Mouth Cleaning Methods on Oral Bacterial Count Analyzed Using Quantitative Polymerase Chain Reaction (qPCR) Method.” Last summer he visited a middle school in a remote village in Tamil Nadu, India, where he found himself teaching the importance of bedtime toothbrushing. “I found the students were using different methods of toothbrushing. They wanted to know which method was efficient. That motivated me to do this project. They all volunteered to be my subjects.”

In his research this year, he tested 8 different oral cleaning methods and found that of the 8 different methods, two, “Toothpaste Brushing + Tongue Cleaning” and “Finger Rubbing + Water Swishing,” were found to be statistically significant as the best. “Between these two, Finger Rubbing + Water Swishing is the easiest, most cost effective and convenient way of cleaning.”

Pranav feels his Maharishi School teachers Barbara Hays and Richard Incorvia, through introducing project-based education to the classroom, have provided him with the competence to present his project in an impressive manner. “Ms. Hays was my adult sponsor, and she supported and motivated me throughout my research. My participation in the Maharishi Middle School radio show, guided by Mr. Incorvia, gave me a lot of confidence and strength.” He also is thankful for the Fairfield company Genetic-ID for allowing him to use their lab.

“Doga Ozesmi and Bimba Shrestha winning the state science fair together, as students from FHS and MSAE respectively, is a first, and something the whole community can be proud of,” said Dr. Richard Beall, Maharishi School Head.

Want to join the discussion?
Feel free to contribute!