“The 17th annual Global Finals, hosted by Destination Imagination, ended Saturday with teams from 17 countries across the globe – including Australia, Canada, China, Mexico, Saudi Arabia and the United States – celebrating creativity through a series of STEAM-based (science, technology, engineering, arts, and math) academic challenges. Students from Iowa, Texas, China, Colorado, Poland and others earned the first place trophy in their respective categories.”

The team competed in the Fine Arts category, but incorporated computer programming and robotics into their set in a seamless and impressive manner. The DI website explains, “For the crayon, by the crayon, and of the crayon—who knew communism could be so colorful and creative?
From their phenomenal original songs to their thought-provoking content, this team transported the Appraisers to a dystopian society we NEVER wanted to leave. Their not-so-colorful character may have seemed bland on the outside, but his dry wit, deadpan humor and ALAN-ness made him stand out from the box. Their Broadway-ready musical was filled with campy crayon, satirical songs, and delightful dancing.
A rotating miniature silhouette cityscape filled our senses without filling the stage. It was enhanced by a professional-quality surrealist landscape on an unusual convex frame. A team-coded hydraulic elevate “took care” of the red, ushering in a benign dictatorship.”

To watch a video of the performance, follow this link. 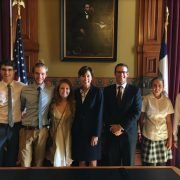