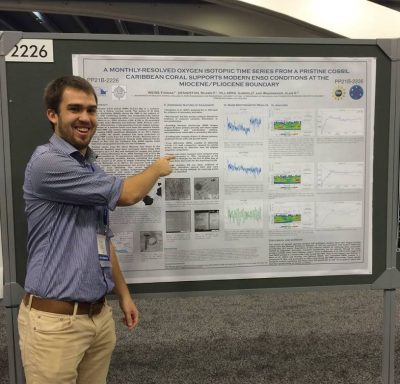 Maharishi School class of 2012 alumni Thomas Weiss just graduated from Cornell College in Mt Vernon, Iowa, earning a bachelor’s degree in geology.  Cornell College has a small student body of 1,200 and operates on a block plan, similar to Maharishi University of Management.

Weiss felt well prepared for his college education due to the consciousness based teaching methods and structure used at MSAE.  He reflects, “I think it was good preparation because our curriculum focused on making connections between classes and between topics within the classes, and I think that was a really good learning strategy for me in college; it helped me understand what I was learning more and see more deeply into it.”

In addition to the learning methods and study skills Weiss maintained from his MSAE days, he also continued the Transcendental Meditation practice he participated in since Kindergarten.  Weiss recalls, “Meditation helped me a lot, we had four hours of class on the block program, I’d get out at three and be pretty exhausted, and then I’d meditate and I’d be ready for the rest of the day.”

Weiss is now moving on to the Ivy League, as he has been accepted to the PhD Program at Columbia University in New York!  He has chosen to earn his degree in Paleoclimatology, the study of climate change throughout earth’s history.  The program will not only be tuition free, but Weiss will receive a stipend to cover living expenses.

We’re excited for Thomas – a degree program in New York City with so many new people to meet, so much culture to explore, and of course, so many things to learn!  We look forward to hearing about his PhD program experiences, graduation, and continuing educational path.  Weiss predicts that he will become a professor, but is open to other possibilities that may present themselves.

🌼Click the link in our bio to read the latest b

Amie Saine leading the Lower School PE class in so

"So, in this “unprecedented” time, let’s tur

"More than ever before, we need to learn to be pat

"As we all attempt to pioneer our way through this

👨‍💻👩‍💻Have you seen our latest blo

💻New Blog Alert💻 💻 Whether students are

🚲Our school organized a group bike ride on Labo

Have you heard of Oobleck? Oobleck is a non-Newton