The Fairfield High School and Maharishi School robotics teams joined several other area schools Friday afternoon at Jefferson County Fairgrounds Cambridge Learning Center for a competition, pitting each other’s project’s against one another in various categories from de-latching and re-latching back onto the starting point to moving minerals around and into a designated area. 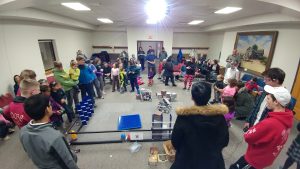 Maharishi School Robotics Team shows of their skills in a community demonstration.

First-year coach at Maharishi School, Ryan Glasgow, said his team seems to have a good working relationship that stems from knowing each other well. The Pioneers went right after the big points, attempting to de-latch and re-latch to the starting point, with the team partially succeeding in it’s attempt.

Tenth-grader Shristi Sharma is a first-year member of the Maharishi School club who is working on the programming and writes code to help move the robot, while junior Yenet Deribe is working on mechanisms and the construction of the bot in her third year on the team.

Sophomore Skylar Halley joined this year because many of his friends were in it, but found it was interesting and is now working on the chaise and the frame of the robot. For Halley, the biggest challenge has been not losing tools.

The teams meet two or three times a week for a few hours at a time and the week before a meet will tighten all the loose ends with four or more meetings to pull everything together.

The next robotics competition is in mid-December.

Sports Editor at the Fairfield Ledger 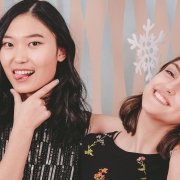 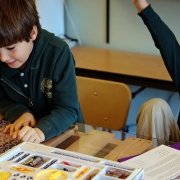 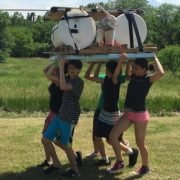 What Does it Mean to be a Team?

How to Make Private School More Affordable
Scroll to top